I remember the stress and pressure I felt when I was going to direct my first film. I was still a film school student, trying to figure out what means what in the film world. I knew very little of what my job required from me but as with everything you live, you work, and you learn. Over the years I have been lucky enough to make many films, and from each production, I came out stronger both as a director and a scriptwriter.

Here I’m going to share with you what I do as a director before I go into film production. Keep in mind that every director will do something, at least slightly, different, and most likely you will come up with a method of your own. Just pick and choose what feels right for you.

1. I read and re-read the script, each time making notes. My notes consist of anything that comes to my mind at the time of reading the script.

2. Once I know the script, the plot, and the characters I sit down and start the script analysis. It is a lengthy and time-consuming job so leave enough time for yourself to make sure you cover everything you need covering. 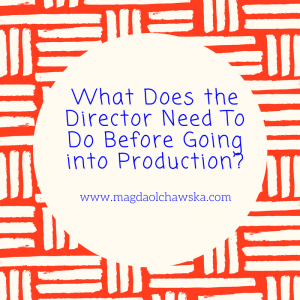 3. I work out the visuals. Sometimes I work closely with my DP, and other times I state what I want and send visuals over. I usually have a very specific look in mind and try to find visual aids such as videos, films and photos that could depict what I’m trying to achieve. Having a shot list done on your own or with your DP is also very helpful.

4. I work out rehearsal exercises for my actors. I like working with the actors and always try to sneak in rehearsal time. For me, it’s not about the mindless repetition of the lines but rather trying to build the character from the inside out. I believe that to do that actors should get together and work together before going into production.

5. I write notes for myself, describing every scene, every physical activity (most likely it will change once on the set, and I run through it with my actors so that we usually come up with something more), action verb, scene objective/s and the characters’ overall objectives. I use those cards during the production to refresh my memory what the scene is about and what should happen for the characters.

6. Sometimes I write the characters’ history and background, but it depends on how strongly I feel about their past. Sometimes I make a few basic notes and figure out the rest with my actors during the rehearsal process.