Once on the set director’s job is pretty straightforward. No, no I’m joking; it’s far from that.

As a director on the film set you need to:

1. Make decisions and often fast, usually, your choice will have serious implications for the whole film (no pressure). You need to be decisive; the crew members, as well as the actors, will come to you with lots of questions so be prepared. You can always say ‘I don’t know. Primarily when working with the actors so you can figure stuff out together. But for the technical stuff, you should know what you are after. It’s also the question of building trust for you as the director.

2. Work with your DP to figure out the shot size, to talk about the staging, lenses and what the scene’s objectives are (some DP’s like to know that to make sure they are setting up the light in accordance to the mood the scene is trying to depict).

3. If you have the time, have a short rehearsal with your actors. 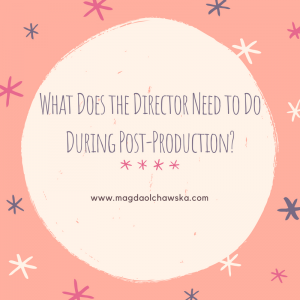 4. Do the run-through for the technical crew and the actors. During the run, you can check with the actors what works and what does not concerning movement and staging and quickly change something if necessary.

5. Make sure everyone is on the same page as you are and you are all making the same movie. I’m not kidding, this is SUPER important.

6. I always like to talk to my cast and crew and keep the atmosphere as friendly as possible. (You  need that on indie, small budget films.)

7. Know when to say action and cut.

8. Not to be afraid to talk to the actors and tell them if you are looking for something different in their performance than they have delivered in the previous take.

9. Know when you want to repeat the take or when you don’t. I believe that each director should know how to cut films, which comes very handy when you have a take, which isn’t 100% what you imagined but you know you will be able to cut it with the previous takes, especially when the clock is ticking and you need to move on to the next scene.

10. Know when something is not working and needs changing. It often has a lot to do with the script; most likely the actor can’t find the objective in the scene or the motivation for action. You need to come up with ideas to make it work.

11. Be flexible. It doesn’t matter how much money you have or how well you are prepared, something is pretty much always going to go wrong and your flexibility will allow you to move on despite the shit storm.