For an indie filmmakers budgets are often tight and in order to pull the production off, we cut everywhere and everything, often forgetting to include the following:

1. The general rule of budgeting is to have 10% – 15% of your budget put aside as contingency money. During my production of “Anna & Modern Day Slavery,” we had one actress who suffered from back problems and we had to pay for her physiotherapy. We also had one actress who turned 30 on the set and decided to celebrate her birthday. It seems like little things but it does all add up. 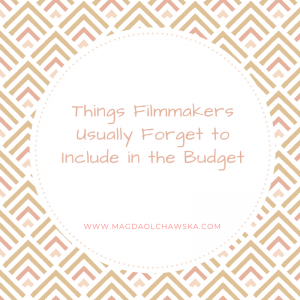 2.  Take away coffees and snacks, especially when you shoot on locations.

3. Wrap party; alcohol and snacks, bought in large quantities, can get pretty expensive.

4. External drives. One is never enough, no matter how big. You need at least 2, or even more sensibly 2 sets of 2.

5. Film Festival submission fees. The fees can add up quite rapidly.

6. Some festivals still expect physical submissions, which means that you will need a DVD, DVD sticker (description on the DVD; you can’t send an empty one) and the postage money.

8. Marketing and promotion, especially when you have a feature film and you are targeting A-list film festivals. To be noticed by those you need a PR team behind you and your film.

9. Film Festival travel expenses. Some festivals cover travelling expenses, and some don’t. Just be aware of that. Your contingency budget could cover those expenses.

11. Encoding and close caption to help you upload your film on the SVOD platform.