To finish “Anna & Modern Day Slavery”, my first feature film on the minimum budget, I devoted four years of my life. Not only to complete the post-production process but also: to run two additional crowdfunding campaigns, to create marketing and promotional plans, to try to keep everyone involved in the loop as much as possible, to be in charge of all the creative assets, to do all of the film festival submissions, to continually explain to people why it is taking me such a long time to finish the film, to run our website, and to run our social media accounts.

As you can see I spread myself thinly, very thinly, perhaps too thinly. I know that it was my project and I was in charge of delivering on my promise to all the people who trusted and believed in me and the project. However, the overwhelming amount of work I had to put into finishing it off, left me with no energy to take it beyond YouTube. 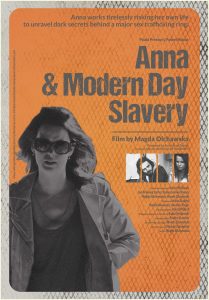 Film festivals didn’t work out for “Anna & Modern Day Slavery”; we got accepted by none. The competition is tough and I couldn’t compete with the projects done by well-known names. I understand this is all business and festivals need to attract funding as much as filmmakers do.

Before I ran my final crowdfunding campaign, a sales agent took my film on. Our contract was only for six months but this road led me literally nowhere.

I ran another IndieGoGo campaign to raise funding for charities working on the ground with the trafficking victims; those charities are often underfunded and in need a lot of financing. That didn’t go my way either. I barely made enough to cover the campaign costs. Then I decided to put “Anna & Modern Day Slavery” on YouTube. I was so exhausted coming up with ideas, giving my 110%, and hitting the wall that it was the only thing I had any energy left to do.

What I’m trying to tell you, my lovely fellow filmmakers is that you need people in your corner. You need a team that can take over some of the tasks from your shoulders. It is easy to become overwhelmed and burnt out in the process of trying to do something useful.

If you had an indie film and you didn’t get to any festivals, what then? This is where creative distribution and building your fanbase who will support you if/when you decide to self-distribute comes in.

Don’t make the same mistakes I did; get help and support and if you don’t have enough funding, focus on making short films and working on your craft. This way you’ll be able to continually grow and expand your fanbase.