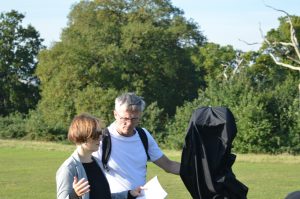 Before you turn up on the film set you need to go through the pre-production process. Film sets are stressful places and it doesn’t matter if you are making a short or a feature film; you need to be prepared. Check this list to know what you, as a director, need to do before you shout “Action” and the camera starts rolling:

1. Have you done staging with your actors? Do your actors know and feel comfortable doing specific actions or walking over to the place you need them to walk over to? If they don’t feel comfortable, the camera is going to pick that up.

2. Do you know what frame and which lens your DP is going to use? Is this what you want and need? Is this frame going to be consistent with the rest of the visual style you agreed on? In short, set your shot and camera movement if the camera isn’t static.

4. Sound – can you hear the actors talking? Is your sound person picking up sounds and noises that will make mixing impossible in the post-production (water running, aeroplane noise, traffic noise)?

6. Before you say ‘action’, run through the scene with the actors for the technical crew so that everyone knows where the actors are going to be in case the light needs to be adjusted, or the lens changed.

7. I know that some directors say that they don’t like looking at the monitor while the scene is playing. I respect that. However, I like my monitor, and I like knowing what is happening in the frame. As a director, your responsibility is to know what’s in your frame and what needs to be out, mainly when you work on a very tight schedule ‘cos you’re not going to have the luxury to keep re-shooting the same scene over and over again.