Digital media are out there and should be used for promoting, marketing and gaining exposure to indie films, don’t shy away from that. I know that social media can be confusing and time-consuming so If you don’t want to end up running like a headless chicken check my social media checklist that I composed trying and making mistakes along the way: 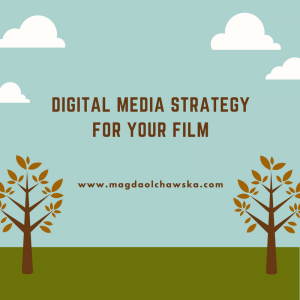 1. You should start brainstorming and collecting ideas on how to find and engage the core audience for your project in the early stages of development.

2. If you are, and I think you should, building social platforms for your project, you should do it as early as possible. When your film is touring film festivals, I feel it is already too late to build online exposure.

3. What is your film’s hook? How are you going to use this hook to attract and engage with your audience? Make it a part of your strategic planning.

4. Take your audience on the adventure of discovering how you are making your film, take them on your set, invite to your production office, to your post-production facilities etc. Making off and behind the scenes is a fantastic opportunity to connect with your audience and it’s usually massively underused by the indie crowd.

5. What kind of social media outreach campaign do you think your film will benefit from the most? Look at the films you like or films similar to yours and see what tools were used to market and promote them. Did they have any ideas you could use for your campaign?

6. What are your promotional assets going to look like (a poster, trailer, spots)?

7. I can’t stress enough how important it is to start building social media strategy, setting goals and planning early on in your project. This way, by the time your film is ready to be released, you already have a committed audience waiting to watch what you’ve made.