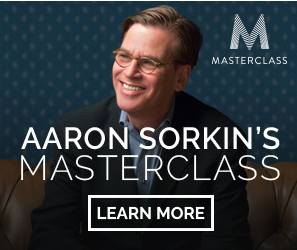 Aaron Sorkin is a scriptwriter behind such successful films as “The Social Network”, “Steve Jobs”, or a TV shows like “West Wing” or “Newsroom”. In 2017 he wrote and directed “Molly’s Game” with Jessica Chastain as Molly Bloom. Personally, I loved the film and how strong and resourceful Molly’s character was despite her disadvantage circumstances and her family life.
Sorkin has been in the business since he wrote his first play “A Few Good Men” that was turned into a star-studded film and released in 1992. Working nearly three decades in Hollywood, he surely knows the ins and outs of screenwriting.
His screenwriting Master Class was the first class I decided to “take” (watched online) when I got the unlimited access to the masterclass.com for my birthday (making birthday presents wish lists works (happy dance)). To be honest, I don’t know what I expected from this Master Class but whatever that was I wasn’t disappointed even one bit.
Even though the videos don’t seem to be long, there are overall 35 of them, which include Writer’s Room, Group Workshops (I wish I were one of the chosen ones) and videos, in which Sorkin shares with his audience how he works, researches his scripts (many of his scripts are biographical) or develops ideas, stories, and characters.

Before I go any further, let me say that I don’t think this Master Class is for the beginners. You do need to know quite a bit about scriptwriting or be a writer yourself to understand what intention and obstacle are or what the story arc is. So if you are a beginner, I would advise to brush up on your knowledge before proceeding. Also catching up on Sorkin’s films is a good idea. He does refer to his films and particular scenes a lot so do watch them beforehand and don’t forget to watch a couple of episodes of “West Wing” to get to know the characters.

To me seeing how other writers or screenwriters work is fascinating. It’s because writing is such an individual and lonely work that knowing how the best of the best writers research their work or come up with ideas is really cool.

I enjoyed watching the classes immensely. I learned quite a bit and confirmed to myself that I already know a lot too (any way of boosting writer’s confidence is always welcome).
The group workshop that was part of this Master Class had five young writers participating who presented samples of their scripts to Aaron. His feedback and advice to his colleagues were always respectful, kind and useable. He gave them tips, asked questions, or made suggestions on how to improve their stories. He never bluntly told anyone what to do with their stories and ideas but instead shared his experience and told stories how he had overcome certain obstacles and it was up to the writer to take away whatever they wanted to take away.
To see how Sorkin runs his writers room and how he collaborates with other writers was inspiring. The “West Wing” writers room was set up to show the audience how Sorkin works with his writers while writing for TV. The whole group had to come up with ideas for episode 1 season 5 (Sorkin left the show after season 4). It was interesting to watch writers bouncing ideas from one another without feeling intimidated or overprotective over their ideas. I guess this is how TV shows writers room looks like. Very different experience to writing a script for a film.

I would surely recommend this Master Class for writers or writer-directors, but only if you already have some experience in the field (a couple of projects behind your belt or you are a film student). Otherwise, you may feel frustrated and overwhelmed with the overload of information thrown at you. If you are looking for workshops or classes that could/would teach you how to write scripts, this is not for you or for that purpose. Plenty of those online.
I would also suggest to watch all the videos at first and then come back to re-watch the videos you found the most useful so the information can surely settle in your hippocampus and stay. Give yourself time, stretch watching over several days, don’t watch it all at once. It is a lot to take in at first, and as with every expert advice, the brain needs some processing time.

Go, learn and shine; we are all waiting to hear your stories.