1. Watch films made by women at the theatres, preferably during the opening weekend, at film festivals, on TV, and online.

2. If a woman filmmaker runs a crowdfunding campaign, support her. Every penny counts so don’t think your contribution won’t make a difference. Your spared morning coffee could make or break our campaign.

3. Recommend films and shows made by women to your friends and your family. 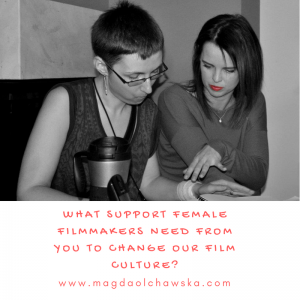 4. Ask your local theatre and/or film festival if they are planning to screen films made by women any time soon. If they do, try to take your friends with you.

5. Spread the word about female filmmakers and female-driven films on social media as much as often as you can.

6. Leave positive reviews on rotten tomato or IMDB (of course, if you like the film). People do rely heavily on ratings and reviews.

7. Share the trailers and spots to films made by women on social media and amongst your friend when those are out.

8. Buy DVD’S or online films made by women; some of that money will reach the filmmakers.

9. If you run a blog or a website, why not give some media exposure to the films you like that were made by women to help them promote their work.

10. If you see the donation button next to our work, please contribute. It will mean a world to us just knowing that someone cares enough to support our work financially.

Men and male-driven films dominate our culture. So please help us sustain movies made by women filmmakers by watching and contributing towards those films. There are a lot of indie films made by women, and that kind of cinema needs exposure and love from the audience too.

The following link will help you get started: https://mubi.com/lists/films-directed-by-women–3