“Columbus”, written and directed by Kogonada is my favourite film of 2018 so far. The film is set in Columbus, Indiana and uses real-life locations, which are magnificent. 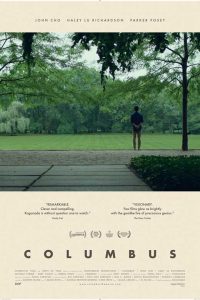 It’s a simple story about Casey (wonderfully played by Haley Lu Richardson) and Jin (played by John Cho) and the complicated relationships they both have with their parents. Both characters, severely hurt by their respective parents, find moving on with their lives difficult.

Casey is a young woman, who tries to make the best of living in Columbus while looking after her self-destructive mum. She is a real architecture nerd, and Columbus, true Mecca of the modernism architecture, provides her with a lot to admire, ponder on and learn from. Jin, young Korean-American, is a son of a world-renown modernist architect who, while visiting Columbus, ends up in a hospital in a coma.

Casey feels she must stay for her mum and doesn’t want to admit to herself or the world around her that by doing so she gives up on her dreams and aspirations, and wastes her potential. Jin, brimming with anger at his dad, wants to get back to his life, without facing any reconciliation with the past.

They both struggle with their parent’s weaknesses and the fact that to move on they need to open up to forgiveness.

The unknown of their present lives is a beautiful juxtaposition with the stillness and simplicity of the architectural marvels around them, which somehow create a metaphorical bridge between their lonely lives, the reality, and choices they have to make to move on.

On their walks, through architectural gems in Columbus, they both slowly start to open up to the possibility that life is not set in stone like the buildings around, but is continuously evolving towards change and new opportunities.

The script is very well written; both actors are fantastic in their minimalistic acting and the direction very to the point. I think special nod must be given to the marvellous work by a cinematographer Elisha Christian. The picture is simple but perfectly aligned with the story, which focuses on the inner life and change of the characters instead of focusing on the fancy camera moves. It’s one of the most visually satisfying films of the last few years. It emphasises the message, which “Columbus” shows the audience; that time and space to look inside oneself is essential, just like breathing.

“Columbus” is what I call vulnerable filmmaking. The story is very human and very relatable, powered by amazing actors and stunning locations.

If you like independent filmmaking in its best and you have not watched “Columbus” yet, put it on your “must watch list”. I’m surely looking forward to Kogonada’s next film.