Recently I went to the cinema to watch “Christopher Robin”. I know the film is not making as much money as expected; the current box office as of this writing stands “only” at $164,877,180. I know that for any reasonable person and any other industry that would be heaps of money but within the movie business this film is underperforming. Don’t even get me started on the stupidity of the current box office expectations and I won’t venture into that now. 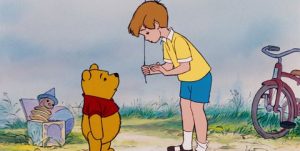 Anyway, as a person in her 30’s (yes still in my 30’s) I was brought up on Winnie the Pooh. I loved the stories, and when the Polish State Communist TV finally started airing The New Adventures of Winnie the Pooh, I couldn’t wait for the Sunday evening to come fast enough. The New Adventures of Winnie the Pooh, as well as the old Hollywood classics from the 30’s and 40’s, were my only window to the other side of the world I was so longing to be part of. To me, Pooh and his gang always represented freedom of thought and creativity, something as a kid brought up under oppressive communist regime I could have only dreamt about.

Winnie the Pooh and Christopher Robin were what kept my vivid, often unruly imagination alive. Thanks to Christopher Robin I never wanted to grow up or rather be a grown up. I think, in the end, I have become one, but if it weren’t for Christopher Robin, I would have lost my childlike innocent much earlier.

If it wasn’t for Winnie the Pooh and his friends, I don’t think I would have tried to hold on to who I am and to my dreams for so long. If someone is looking at my path from the outside, I’m sure this person firmly believes that I should have given up ages ago and get a “proper job”, or quite possibly thinks that I must be crazy to keep walking the path I am walking. My way out of the forest has been, more often than not, invisible to my two human eyes. Possibly my third eye can see much more, but that is to be seen.

In all honesty, I didn’t realise how much I owe to this amazing, loving characters until I left the cinema. I have to credit Christopher Robin, Winnie the Pooh and the rest of the gang for helping me to be who I always wanted to be and for inspiring my imagination to be free, even though everything around me was oppressed and repressed.

The undeniable power of the storytelling and stories is often something that gets us, humans, through hard times. Stories shape us, influence our paths, and help us become the best versions of ourselves we could become.