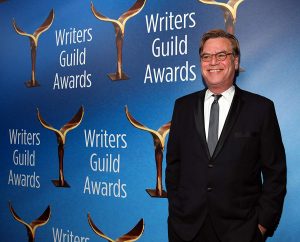 Aaron Sorkin is an American screenwriter, director, producer and playwright. His writing credits include: “Steve Jobs”, “Moneyball”, “The Social Network” and “West Wing”. If you haven’t seen any of his films or shows, I strongly recommend you do.

1. Find a short story you like and adapt it to a screenplay. Adapting a story, which already has an intention, obstacle/s and conflict defined will let you practice writing characters, scenes and dialogue.

2. Use a short story, a fairy tale, a fable or a book to adapt the first ten pages of your screenplay. Map out what the intention, obstacle/s and conflict in the story are scene by scene.

4. Keep a journal and make notes about what works in your favourite films and what doesn’t in the ones you didn’t like.

5. While watching your favourite films note when the inciting incident happens. How far into the film it is?

6. Practice breaking down scripts into three acts. Describe in few lines what happens to your character in each act. (Look for scripts online)

7. Find a couple of screenplays of films you like and ask yourself the following questions:

8. Take your story, idea or the script you are writing and create a schedule for yourself to complete the story (daily count of pages or scenes to be written). Try to make progress every day to gain the confidence to carry on.

9. Choose a few TV shows or films you like and write:

After you finish writing compare all the scenes and ask yourself:

10. Write an opening scene for a film or a TV show that starts in the middle of a conversation. How can you establish who the characters are and what their intentions and obstacles are?

11. Write a 1 — page scene between two characters with dialogue. Now read the dialogue scene out loud and feel and hear how it sounds. What changes do you think you need to make now that you’ve heard it out loud?

12. Break down the first episode of one of your favourite TV shows.