One of those responsibilities as a director is to figure out, either on your own or with your Director of Photography, how you want to use the camera positioning, framing and movement to tell your story. 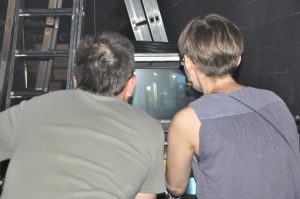 Some directors work with a storyboard; others prefer working with a shot list. But the majority tell a story visually on paper before they start shooting.

When I try to work out what I want from my visuals, I usually go through the following questions/suggestions/wonderings before I sit down and work out my shooting list or work with the Director of Photography (DP) to come up with one:

1. What matters to me, the director, in the scene the most?

2. I treat everything that happens in the script and in front of the camera as a real event.

4. How far must the character go within the space in front of the camera? It’s not only a technical issue but also must be right for the character. How will that movement affect the continuity of the story?

5. The character always needs to be looking at the object of their interest. Where is that object? Am I going to show it to the audience? How important is that object?

6. Blocking means placing physical objects in the right place for the character to either have easy access to it or a difficult one.

7. While figuring out the blocking, I always set it up like real events.

9. What do I need to happen in front of the lens for the scene to work? What changes in blocking and staging need to take place to tell the story the way I want to tell it?

10. If I have very limited time on the set, I always make sure the camera picks up on the scene’s key objectives.

11. The character gets motivated to take action by hearing or seeing something that nudges him towards the decision.

12. I always need to remember that characters can’t find solutions to their problems right away. That means that I can’t make it too easy for my character to find what they are looking for.

13. What is the central vision of my story character/s?

14. What do we, as humans, see in various situations? Characters are humans too so they will see what people would see in real life. How can I implement the real-life experience in my camera movement and actors blocking? How will that enhance and change the visuals?

16. How good is the relationship between the characters? It will reflect how close they are on the screen and in the story. How can I portray that with shot size and camera movement?

17. If I have time I place the camera in the same position as an observer would stand while witnessing the scene that is taking place between the characters. In real life, when two people argue on the street, where do I stand? Do I come closer or observe from afar?

19. What is the intention between the shot size? How will that shot size relate to the next shot and the next scene?

20. Where are the physical objects placed? Are they easy or difficult to reach for the character?

21. What is the character’s intention in the scene/take? How is my camera position going to emphasise this intention?

22. Three things to point the camera at:

24. Staging is placing the camera in the right place to pick up the character’s intention. What are you going to include in your staging and what aren’t you going to show to the audience?

25. Remember that staging strongly depends on the narrative of the story you are trying.

26. How are you going to show withhold information to your audience realistically and believably?

27. If you decide to use close-up shots for your character/s in certain scenes, you should be very clear about what motivates those shots.

28. Make sure that the whole crew is on the same page when it comes to naming the shot size. Different shot sizes are called differently in the UK, USA, and Europe. For instance, a shot could be a Long Shot in Europe, but over the pond, it could be a Medium Shot.

29. Figuring out the motivation behind the camera movement could help you create a storyboard or a shot list for your film. Motivations to take into consideration:

30. Don’t be afraid to change the target in the frame.

31. How are you going to maximise your camera set-ups? (set-up starts when you turn the camera on until you turn it off) Sometimes the time is so limited on the set that maximising your set-ups is the only way you can get enough footage to make the film.

32. Set-ups allow you to have options in the editing room.

33. Learn how to give yourself the options by using set-ups. For example, you can have different first positions for the characters. I would suggest stretching the set-up as much as you can to cover more without having to move the lights too much.

34. Ways to position your camera:

35. When you want to see something very up close, make sure the camera always stays on the same line as the character looking at the object.

36. With each camera movement and positioning, you need to remember to look through the character’s eyes.

37. How are you going to depict time jumps to keep within the notion of an illusion of continuity?

39. Make sure your camera is always on the same side of the line. Don’t cross the line without showing the audience that you are doing it. Crossing the line creates confusion.

40. What are the two most important objectives of each scene? Aim at centring your every set-up around those objectives.

41. Be clear with the actors about what you want them to do in the space they have in front of the camera.

42. Give yourself options of alternative takes and set-ups — the idea is to have the same core set but used in a slightly different way.

43. Watch your footage without the sound and see, which takes do you think work the best?

44. While shooting, keep checking with yourself if you are getting everything you need from each take and set-up.

45. You shouldn’t end your shot on the changing objective; it should overlap with the next objective in the next scene/take. So keep that in mind while working out your shot list or storyboard.