Amancay Tapia is a multi-award winning filmmaker, freelance journalist and a founder and blogger at The Lady of the World. She is also a mum living her life to the fullest. Amancay has a proven track record as a film director as well as a writer. From our Twitter exchange, she comes across as a person who cares, which in my personal opinion is the key to honest filmmaking or journalistic work. Amancay also works part-time at the House of Commons (UK Parliament). As you can see she is a busy, modern woman who in pursuit of her passion must juggle a lot. 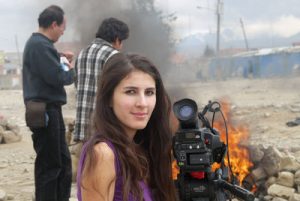 I finally managed to watch her feature film “Campo De Batalla”, a story of five women trapped in a beauty salon due to a social revolt on the streets of La Paz, Bolivia.       I loved the animated opening sequence, which I thought was undoubtedly a nice touch.

The film is set in one location, the beauty salon, newly opened by a single mum, who only recently got back to La Paz after working in Spain for ten years. During her time away, her daughter, who was looked after by her a bit eccentric mother in law, has grown up. This experience, not seeing their kids growing, for most parents is painful.

The visible and palpable tension between the mother and the grandmother makes their reactions to some of the things they say to each other explosive and very unpredictable. As an audience, you never know what will trigger the blow-up.

During one of those massive and emotionally draining disagreements a bride to be runs into the salon for her bridal makeup and hairdo. While the bride is well looked after in the salon, the unrest outside is becoming more and more volatile and getting entirely out of hand at some point. When the women realize that the outside situation is very dangerous, a young woman runs in looking for a refugee. For safety, the owner locks the front door. However, after a massive explosion, it turns out that the entrance to the salon can’t be open and the phone lines are cut off. The five women are stuck together in a small confined space with barely anything to eat. With every passing hour, the revolution outside is getting louder, and it reflects in the situation inside the salon.

Even though the characters experience much of interpersonal conflict with one another, for some reason the salon feels like a safe space for them to express their real emotions, concerns and fears. The dynamics between the five of them is not based on rivalry, but somehow feels real; full of contradiction and conflicting human emotions. The longer they stay stuck together, the more honest they become with one another. It also begins to turn out that the tales they tell each other don’t entirely match the reality.

“Campo De Batalla” is an independent film made on a tiny budget, shot in 21 days.  The post-production took a year since Amancay had no post-production budget. She had to learn Final Cut Pro to be able to finish the film.  Despite the limitations, the director knew she was going to encounter, Amancay Tapia did it anyway, and I applaud her for taking the risk and giving her all to tell this story.

If you are tired of the usual pulp you can find at either Netflix or Amazon, “Campo De Batalla” is a film you should watch to slow down, connect with real emotions, and real-life choices. Those five women are also trying to make the best out of the crazy situation they are faced with and provide us, audience, with some fun, while doing so.

To check out Amancay Tapia’s other work go to her full of hidden treasures website: https://theladyoftheworld.com