I realise that a lot of people don’t like, or perhaps even hate Netflix, but for a working and homeschooling mum, Netflix is a Godsend.

One of the shows I recently discovered is “Sensitive Skin” with Kim Cattrall. I’ve always liked her and thought that “Sex and the City” without Samantha wouldn’t have run for longer than a season, maybe two. 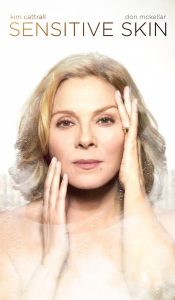 In “Sensitive Skin” however, Kim Cattrall’s character Davina is nothing like Samantha from “Sex and the City”. Davina has been in a long-term relationship, she has a son, who is not so keen on his parents and blames them for everything that has been going wrong with his life. However, Davina doesn’t try to fix him; she is trying to fix her own life, which only recently she came to realise that has not been as satisfying as she imagined would have been when she was young, full of dreams and hopes.

When we meet Davina and her husband Al, they have just moved back to the city, leaving their suburban lifestyle behind, which wasn’t suited for them anymore, once their son left the house. The move and the city life was meant to revitalise their relationship. I can only guess Davina was hoping that leaving the old lifestyle behind could set her free from the daily routine and inner disappointments and struggles.

What I like about this show the most is the following:

I did fall in love with “Sensitive Skin” and Davina. I wish HBO kept on making it. I would like to know if Davina finally found what she was looking for.