Everything I know about independent filmmaking (from development to distribution), I learnt the hard way working on projects and seeing in real-time what works and what doesn’t.

To make the process easier for other filmmakers and help them as much as I could, I created an Indie Filmmaking School, which is the ultimate practical guide to independent filmmaking for newcomers and seasoned filmmakers.

Check out all the Indie Filmmaking School’s modules below to see what each has to offer. 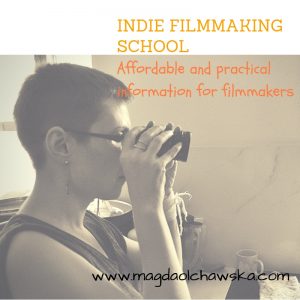 CV Templates for Writers and Filmmakers

89 links to film distribution companies’ websites (for both: narrative and documentary films)

88 Ready to use production documents

– “Film Distribution of Indie Films in the 21 Century” (How do you distribute an indie film? What do you need to distribute your film successfully? Are you stuck with your film’s distribution? This e-book will help you move forward and find a successful path for your distribution.)

–  “How to Write Your Marketing and Distribution Plan”

– “Once You Take Your Film to the Market You Should…”

– “Three Marketing Hacks to Help You with Film Distribution”

-“What Not to Do While Marketing Your Film?”

– “Director’s Relationship with the Camera”

– ” How to Work With the Film Crew on the Film Set”

– “How To Approach Production Companies”

– “A Little Bit More About the Characters”

– “If You Are Asked For a Script Feedback”

– “Headlines That Will Make Your Life Easier”

– “Getting Your Work Out There”

– “Digital Marketing In A Nutshell”

– “Films and Videos Pitching E-book” by Magda Olchawska (How to pitch your films, scripts and ideas.)

– “How I Run Successful IndieGoGo Campaign to Make a Feature Film” ( Running a successful crowdfunding campaign is not as easy as some people make it look. If you have big dreams for your projects and need to crowdfund your budget this e-book is surely for you.)

Hundreds of verified links to websites for:

This bundle of links will make your life easier while you are trying to promote, sell or/and distribute your film.

All the production documents and contracts you need to run a successful production.

– Agreement to edit the film,

– Agreement to transfer the rights to the screenplay and the artistic contribution,

– Agreement with the Director of Photography,

– The budget template for promotion,

–  Letter to the equipment company,

–  Letter to the transport company,

–  Standard terms and conditions of the product release agreement,

I’ve worked as a film producer, director, writer and screenwriter since 2004.